An interview with Elvis Richardson ( a favourite) finalist in the Ian Potter Art and Sport prize will be on ABC arts this Sunday afternoon.
No comments:

Hi Helen,
your current show at Sutton is on my way between the art supply shop and the studio, so have ducked in a few times - and its really growing on me-
Is it all about relational aesthetics?
someone suggested that, in the end, your work is hopeful, is it?
I feel the content of your show is almost undiscussable - that its still private conversation stuff- and there is no vocabulary for it in the art world yet, if you know what I mean - the 'alternative', communal etc has only just been accepted as the noble path in Australia- let alone a crit of that existing- have you found a stronger way to talk about these things in Europe?

Hi Kate,
The show at Sutton - to me it's not much to do with relational aesthetics. Though I am not generally one to be dictatorial about my ideas. Relational aesthetics seems to me something like a lava lamp in a gallery context, trying to transcend something but always as it approaches, it falls. (Walead Beshty is better at explaining this than me: http://backissues.textezurkunst.de/NR59/NEO-AVANTGARDE-AND-SERVICE-INDUSTRY_2.html)
To me the Sutton work is to do with trying to get your head around how individual actions become a part of, or exist within 'culture'. Especially now, when consumer culture is accepted as 'the way things are', sitting alongside ideas of environmentalism and sustainability which can never really be integrated into 'me' culture.
So the work is talking about broader cultural ideas which we are expected to accept, like 'man on the moon as progress' or 'western medicine is superior', and presenting moments when those ideas begin to fail for somebody.
It is difficult for me to talk about that show as a collective body of work because, though aesthetically in line with one another, each 'mis en scene' raises a different idea or presents a different circumstance, they are like film stills almost to me.
I think of it as being hopeful, hope through a cynical lense perhaps. But attempting to get people to think about their own position within society, their own everyday actions, though not in a pushy way.
These works are in some ways quite oblique, partly because they are embedded with references across the whole spectrum; socio-political, historical, art-historical, personal, mass-cultural.
I suppose there is vocabulary for everything in the art world, potentially. It is maybe more a matter of who is accessing or choosing to embrace those vocabularies, and why.
I did not find a stronger way to talk about these things in Europe. There is of course present in Germany the lineage of painting as socio-political commentary a'la Jorg Immendorf, Neo Rauch, Martin Kippenberger et al, but that school of approach sits these days more as a mainstay of the commercial market, it having evolved up to and during the demolition of the Berlin Wall, and in that way gained its historical relevance which has since been well and truly commodified. Not that that means it is bad or irrelevant now, but that it is within a sort of holding pattern of meaning, as other approaches branch off and spiral away.
The art world in Australia, though it may at times be catty and neurotic, is an interesting place to me, because it is dislocated from the 'global' art world, and so there is the continuing habit of gleaning some idea of an international standard to meet up to, and which more often than not is overshot, and so work in Australia is at times slicker in its presentation, more exhaustive in its ideas, than its global counterparts, it's something you notice in Europe, that often people are more comfortable with shabbiness or sloppiness in presentation than they are here. These points where Australian artists are looking in overseas magazines for what is current and then mixing it with something local and using the local vernacular to articulate its meaning, these points I think are very important for cultural production in Australia, latent identity-formation which will become more apparent in retrospect.
Sorry, what a rant!
Speak soon,
Helen x
No comments:

Broadsheet: 'Defining and curating the global' by Mikala Tai
No comments: 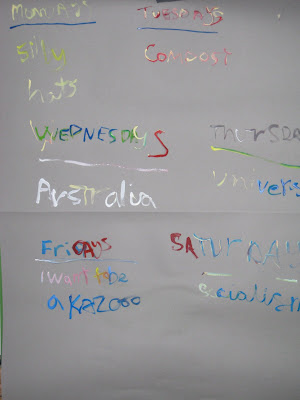 hello blog : sorry am in between jobs and soughting out a new place to blog from , can't do much at the City library image wise. And I think the font is being crazy to- big little bold?
But I will be back soon.
No comments:

Poor Jess - Some fool at block gallery has taken her sweet gallery name and convoluted it into a terrible exhibition title. Its so blatant - he hasn't got a leg to stand on - where else would you come up with those words? 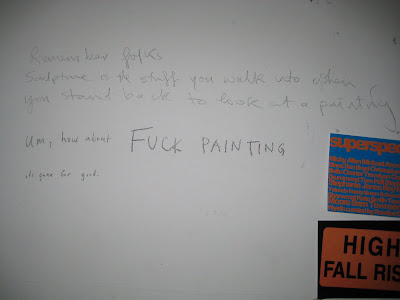 if its too blurry-
'remember folks,
sculpture is the stuff you walk into when you stand back to look at a painting.
Response: Um, how about Fuck Painting its gone for good'
2 comments: 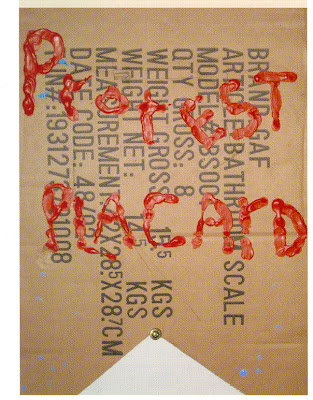 Viv Binns - sorry I am not sure of the titles, the one below is with Derrick O'connor too. I have been thinking about Viv so much. The catalogue for her recent retrospective is such a nice one - it holds in it her - if that makes sense ? I geuss I mean that it is less theoretical and more of a lifesyle explained. She's a trippy dynamo. Does the cosmic thing with gravity maybe, that psycadellic thing that we are doing with as much substance as designs for T-shirts maybe. She is so encouraging. I keep thinking about the weird carpark conversation I had with her after my honours assesment - bless her she really went in to bat for me - she did this smart thing I hadn't thought of - I would always have to answer for my choice of materials and would flop around in answering - but Viv managed to couch my using cardboard in Art History - she linked it to the modernists - one of there revolutions was to use cardboard - Picasso - so its actually a dated, daggy scrappy thing to use and not a cool kid thing to do, I didn't wish to be reactionary - I wasn't using cardboard to stick it to the establishment - how boring - but I was just a bit shy about making - and always feel a bit in between - not really and artist - but just want to think about art through making - anyways, Viv helped me get that across in my assessment - and I think she enjoyed the process we had this conversation wher she explained that after her initial show and the attention she had to shake it off and be a hedonist - what a lovely hedonist, it doesn't seem to be about self indulgence, but community projects and ladies. I miss those art school conversations - speaking in a egoless idea place. So I think about her choice a lot as I screw it up in this art town.

It's dissapointing, I thought of all the places in the world - you could be confussed- it would be in the 'art world' - but you can't you have to know stuff there too. Poor me ! I'll go now, sorry xo 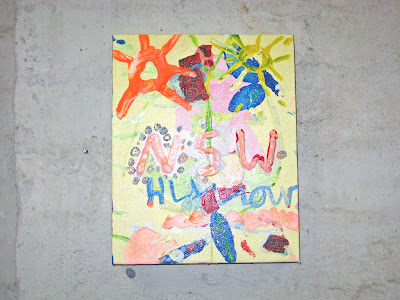 went to DAMP opening last night at Uplands - it was neat - something that you didn't expect - not junky and youf at all - georgeous 'monumental' marble hand painted from a Better Homes and Gardens craft mannual- a sturdy constrction with chairs screwed on top, with just enough gap between it and the ceiling for sitting - outsider attempts to mount sent the gallerist scurring for release forms - Uplands is a great space with theh window blocked out - I love the parketry -parquetry? (spelling!!) floor, like the Lourve! a swell essay by miss Forde - collective stuff is funny in that we, well I, still try and pick apart who did what and and people involved lay claim to what they did - like on the invite I was trying to place each set of feet - a few people told me who did what- a few people seem to have painted all the marble - people told me their friend is in the show and it was their friends idea etc etc, I still wanna know these things, we wanna be included, it is sought of a ratio with the groups attempt to dissolve individuals. So apparentley they are going to have meetings on top of their construction and we are welcome to come watch, pop our head up and look at their feet. I think I might need to go there to sit down cause the studio chairs are all up there, on top. 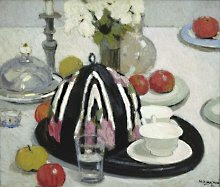 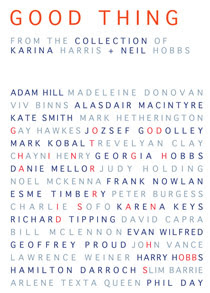 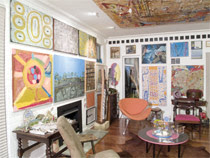 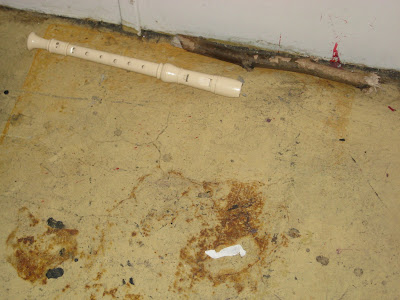